Situated in a commanding position at the mouth of Adriatic Sea, , at the most westerly point of Greece, and at the crossroads of East and West, Corfu has a past that has always been turbulent, a result of constant claims on it by enemy functions. For Corfu, Greek civilization began in the 8th century BC, when it became first an Eretrian settlement and then a Corithian colony. At this time, the town was located to the south of its present site, on the Kanoni peninsula. It soon gained independence from the mother city-state and was able, both by its economic and by its naval strength, to dominate the Ionian and Adriatic seas, while at the same time mainly during the 6th and 5th centuries BC, it was developing important artistic traditions. But from the end of the 5th century, Corfu was weakened by internal strife, and the island became the "apple of discord" between the Romans and the Illyrians. From the 4th century AD onwards, it was part of Byzantine Empire and it was during this period, in the 6th century, that the ancient town was abandoned after repeated barbarian raids. The new town was founded to the north of the old one, on a twin-peaked peninsula where today the Old Fortress stands. Always a target of enemy attacks, the fortified "Town of the Peaks" (Coryfo), as it was called during Byzantine times, survived constant sieges. In 1207 Corfu was ceded to the Venetians by the victorious knights of the Fourth Crusade. Subsequently, the Despot of Epirus, in 1217, the Anjou dynasty in 1267, took the island. After more than a hundred years of Angevin domination, Corfu fell for the second time under Venetian sovereignty. In 1386 the flag of Serene Republic was raised on the peak of the Old Fortress, heralding 400 years of stability, a period that more then any other was to give Corfu its special characteristics. 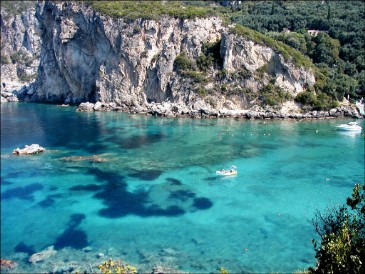 The importance to the Venetians of Corfu's position, and the repeated enemy threats, led to the fortification of the town, a major undertaking which started in the 15th century and continued until the 18th, when the Venetian rule ended. The fortifications, initially the Old Fortress and later the walls that enclosed the town and the New Fortress were strong enough to withstand Turkish raids in 1537, 1571, 1571 and 1716 and thus to foil the Turks' attempts to overrun Europe. Corfu was the bastion of the Venetian Republic but Napoleon in 1797 brought Corfu under the rule of the French, and on 21st March 1800, after Napoleon's surrender to the Russian Turkish alliance, the island was recognized as the capital of the Septinsular State. After a second period under French domination, (1807-1814) Corfu became in 1815 the capital of the State of the Ionian Islands, under the protection of the British. The same year, at the Congress of Vienna, John Kapodistrias who was to become the first President of Greece, proposed the creation of a new state. During the 19th century the artistic and cultural tradition continued. At this time many Greek scholars were fleeing their Turkish-dominated homelands. Finding a haven in Corfu, they turned it into the most important cultural center in Greece. The first Greek university was established the Ionian Academy (1824-1868) and quickly started to produce the first great scientists of the new Greek State. After 50 years under British protection, in 1864 Corfu was finally united with the motherland. The great Greek poet Dionysios Solomos, who spent the second part of his life on Corfu, made a mark on the intellectual life of the island. Part of his poem "Hymn to Liberty" was set to music by the Corfiot composer Nikolaos Mantzaros and subsequently became the Greek National Anthem.

The Old Town is one of the most charming parts of the Corfiot capital and owes its peculiar architectural planning to the rules set by the Venetians for its defense. Built between the walls and the two Venetians castles, the Old Town offers both resident and visitor the opportunity for romantic strolls in enchanting surroundings. Here, in the picturesque '' maze of the narrow streets (Kadounia), under the tall buildings and among small squares and old churches, the present meets the past, and it seems that time stands still. The charming housing blends harmoniously with the impressive arcades of the building of Liston and the majestic 19th century Palace of St. George, which borders the largest and most beautiful square in Greece: The Esplanade. The architectural richness of the town continues in the picturesque streets of the busy commercial center and also in more quiet neighborhoods where among old mansion-houses stand the present Town Hall (17th century), the Ionian Parliament(1852), and the old Government House (1840). Most important amongst the many churches (mainly from the 16th to the 18th centuries) are the Metropolitan Church (16th Century) and the Church of the Patron Saint of Corfu St. Spiridon ( 16th century) where, respectively, the holy remains of St. Theodora Augusta and the island's holy protector are kept. Most important of the town monuments are the Maitland Rotonda (19th century) in the upper part of the Esplanade, the burial monument of Menecrates (circa 600 B.C.) in Garitsa and the Byzantine church of St. Jason and St. Sosipater (ca. 1000 AD) in Anemomylos as well as the ruins of the early Christian Basilica of Paleopolis and the archaic temples in the Kanoni peninsula. The local customs, the processions, theatrical and especially the musical activities, the artistic festivals offer many opportunities for recreation both in and out of town, and complete the enchanting atmosphere of the historical capital of Corfu.