Central Zagori ( duration 11 hours )  08:00 - 19:00
Zagorohoria constitute a unique residential, historical and cultural unity of 46 villages north of the basin of Ioannina, in the north-western edge of Pindos. The physical boundaries are mountain Mitsikeli on the south side, river Aoos on north, the mountains of Ligou on the east and the mountain Timfi on the west.
Zagori, geographically, is divided into three sections: the Central, West and East Zagori with twenty, ten and sixteen villages respectively.
Today Zagorohoria maintains their cultural heritage in an effort to continue the traditions and customs of the region. The particular architecture, the traditional music, the natural beauty, the wild beauty of the mountains and rich flora and fauna of the region are those characteristics that distinguish it.
In the region of Zagoria is developed a unique architecture, based on the abundance of stone and wood. The architecture of Zagori is a good example of imitation of the nature by human. The habitants of Zagori had to face the harshness of the climate and space. A constant struggle characterized the relations between human and the area. So, the houses are very tied to the landscape, the mentality and lifestyle of local residents.
Kipoi is a village built on a hill. Characteristic of the village are its gardens between which flows a river decorated with stone bridges. The village of Kipoi is located in Zagori (at an altitude of 750m).
In Κιποι you will find cobbled streets, stone houses, loggias, the clock and the tall bell tower, the Church of Agios Nikolaos (1779), the Monastery of Bayas (1620) as well as the museum of Agapios Tolis with the wonderful collection of folklore material.
Among the things worth visiting in the village are the Folklore Museum of Agapiou Toli, the Bridge of Plakida west just before the village, the Bridge of Kontodimos at the western entrance of the village, the Bridge of the Mill just after the east exit of the village and the Bridge of Pitsionis at 1Xm east. The bridges of the area are many, because at the time of the flourishing of Zagori the village was its administrative center, so visitors and goods had to be able to cross the rivers all year round safely. Almost every building in the village maintains respect for the architectural tradition, whether it is old or new
Monodendri, at an altitude of 1100 m., Is one of the most beautiful and representative Zagorochoria. Together with the neighboring Vitsa, they form an incomparable residential complex that characteristically expresses the traditional architecture of Zagori and Epirus in general.
The Gorge of Vikos
The famous Gorge of Vikos extends to a length of 12 km and has been recorded in the Guinness Book as the deepest in the world (1,350 m. The maximum height of the rocks from its riverbed). natural landscapes.
From Monodendri one can enjoy some of its most spectacular and fascinating views.
Agia Paraskevi Monastery
The route starts from the central square of Monodendri,
It is 800 m long and is crossed by an ornate cobbled path. On the left side of the Monastery "The little houses", hiding places of the locals during the Turkish-Albanian invasions of the past centuries. Today's remains: traces of wooden bridges, ruined walls with loopholes and a chapel, from where the most daring descended into the ravine to carry water to the women and children trapped in the caves.
Total Duration: 11 hours 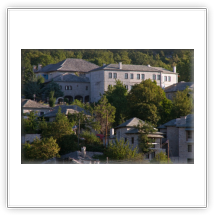 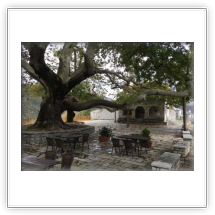 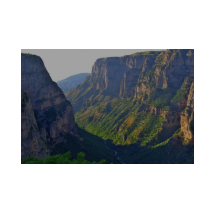 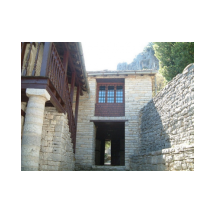 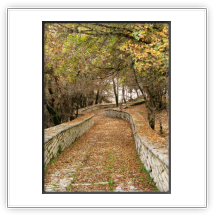 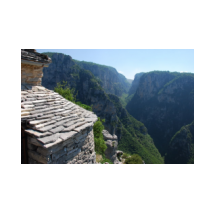 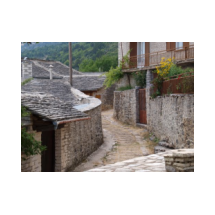 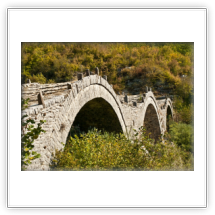